The Trinity Church in Ishkoldi

There is one of the most beautiful and valuable historical building in Belarus, which is located in the village of Ishkoldi of Baranovichi district (Brest region). This church was built in 1472. Among the temples that have not undergone total restructuring, this church is the oldest in our country.

The cathedral was briefly given to the Calvinists (at the end of the 16th century), but in the next century it was returned to the Catholics. There is some evidence, that the building may have belonged to the Orthodox Church. This assumption is based on a drawing by Napoleon Horde. When he painted the cathedral in 1873, it was dominated by a small dome ("makovka"), that is typical for Orthodox Christianity.

Features of the architecture

You will notice the Trinity church from afar, that standing on a small hill. The white laconic facade immediately attracts attention, not only due to height.

The building imitates the Gothic style - the architects probably relied on popular European buildings. However, the church is not very rich in details, which is typical of real Gothic architecture - rather, we are dealing with styles. We are sent niches of different shapes and sizes, distributed on a fronton, and the shape of the facade itself. 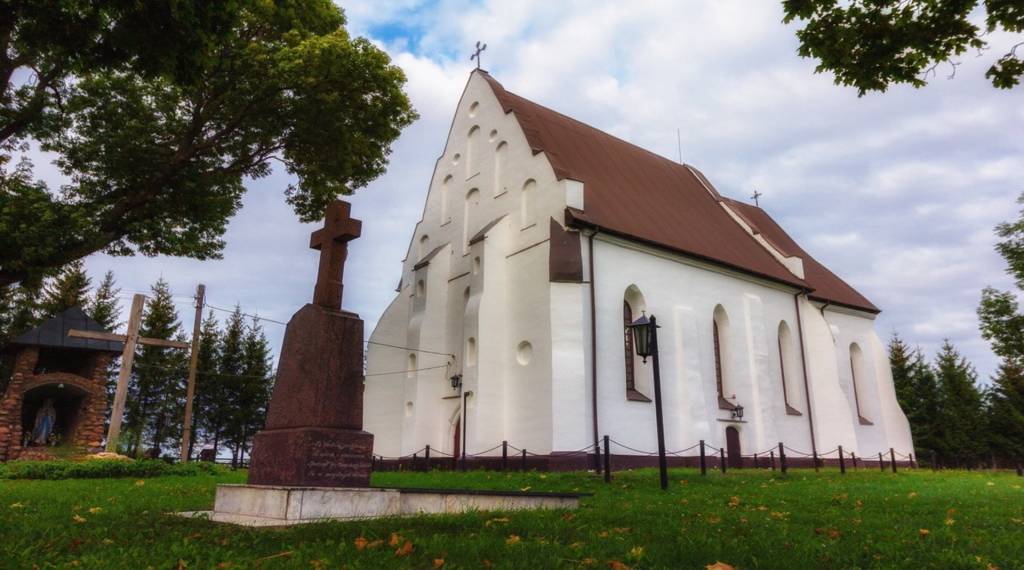 But even without the abundance of details, the building stands out from the rest of the city. The white colour of the building, as already mentioned, also contributes to it. Completes the majestic view of the temple gable red-brown roof.

At the entrance, visitors are greeted by a beautiful bram (gate), that is already a modern solution, which, however, fits perfectly into the composition.

From time to time, they renovate the building. If you get to the village soon after the renovation, you’ll see a white floating temple. But when the whitewash begins to wear off, the church has a special charm. It is still a building that was built in the 16th century, so it looks slightly "stale". The territory around the church is beautiful and well-maintained. Employees are looking after it.

How to get to the place

Those who are going to get by car, should be noted that there is no exit to the village along the road from Minsk. It is recommended to go either through the Islands, or through Petkovichi (a little later. There is another way, more better route, to get through the village of Mir to see Mir Castle, the village of Polonechka and two other related villages: Small and Big Zhukhovichi.

If you choose this route, you will cover three regions at once: Minsk, Grodno and Brest. You can come back through Nesvizh, adding a few more sights to the trip plan. But we will come back to our route.

Polonnik is an abandoned, and not the only one interesting place, there is also Radziwillow Palace, as well as a magnificent wooden church of Saint Yury. There are beautiful wooden temples in Zhukhovici, which you will definitely want to take a photo. After visiting all these interesting places, you can go to Ishkold, to admire the Trinity Church.

Please note, that the temple is active and it is not for tourists. So on days when there are no services, it’s often closed. You can definitely get in on the traditional days of worship and on the big holidays. But from the outside he looks majestic, it is unusual - interesting to meet without going inside.

If you like buildings that have seen many historical events in their lifetimes, endured different wars and revolutions, the Trinity Cathedral in Ishkoldi must be visited. This is an amazing example of old but well-preserved architecture - and a real cultural pearl of Belarus.